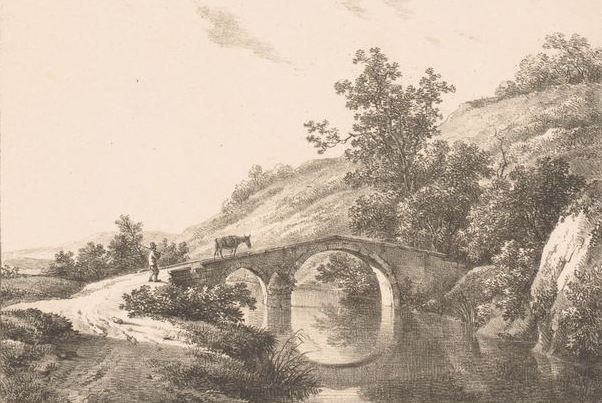 Part of Man and donkey on bridge (1813­–33) by Andreas Schelfhout. Print held in the Rijksmuseum in Amsterdam, the Netherlands. Public domain.

WordPress has introduced a monthly word prompt that bloggers may use as a starting block for a new blog post. I’ve been lacking the time to get inspired to write, so I thought I’d give it a go. This month’s word prompt is ‘bridge’.

While I was looking at old paintings of bridges for inspiration, the Dutch word ezelsbrug, literally ‘bridge of donkeys’, sprang to mind. It means ‘mnemonic’, so Dutch speakers learn both the word and the concept from a young age at school, but I suddenly realised that I didn’t know anything about its etymology. A quick search taught me that it was a loan translation from the Latin phrase pons asinorum, also literally ‘bridge of donkeys’. According to a Dutch online etymological dictionary, the phrase originates from Pliny the Elder (Natural History, Book 8, Chapter 68), who describes female donkeys refusing to cross a bridge if they can see the water below it shimmering through the planks.

I didn’t know that English had borrowed the Latin phrase and its translation, ‘bridge of asses’, because it is so little used in English. The reason for this is probably that the meaning is different in English. Apart from specific meanings relating to logic and geometry, the Oxford English Dictionary gives a more common figurative meaning of the phrase as ‘an obstacle or problem which will defeat an unskilled or foolish person’. Lexico explains it as ‘the point at which many learners fail, especially a theory or formula that is difficult to grasp’.

A very timely ezelsbrug, or mnemonic, is ‘Spring forward, fall back’.